If you are considering hunting, one of the most important, if not THE most important thing to learn is proficiency with a firearm. The last thing you want, is to to put in all the hard work, locate the animal you are hunting, only to miss your shot, or worse yet, wound an animal without recovering it.

Our team recently had the opportunity to host a long range school event for our friends at Benelli, along with a handful of industry writers from some of the most popular publications. This event was to put the new Benelli Lupo to the test.

Below is an article from Andy Massimilian with American Hunter Magazine. We hope you enjoy it.

“They will get you hitting at 1,000 yards before lunch on day 1”, explained Greg Duncan from Blue Heron when pitching a story to me on Outdoor Solutions Corp’s Long Range Shooting School.  Greg is a straight-up guy who’s not prone to exaggerate, but I was incredulous that success at 1,000 yards was as achievable, seemingly easily achievable, as he described.  As it turned out, he was correct, but on a 3:00 p.m. timetable rather than noon.

The Long Range School is produced by Texas-based Outdoor Solutions Corp, which also arranges big-game hunting and fishing expeditions. I took the Level 1 course designed to help prepare big-game hunters for success on what is typically an expensive and possibly once-in-a-lifetime hunt where a longer-distance shot may be the only shot available. Taking a 1,000-yard shot on an animal is not encouraged, but learning how to connect with targets at that range and at distances beyond your comfort zone coming into the class helps with the more realistic, ethical shots you’ll potentially take on a hunt. 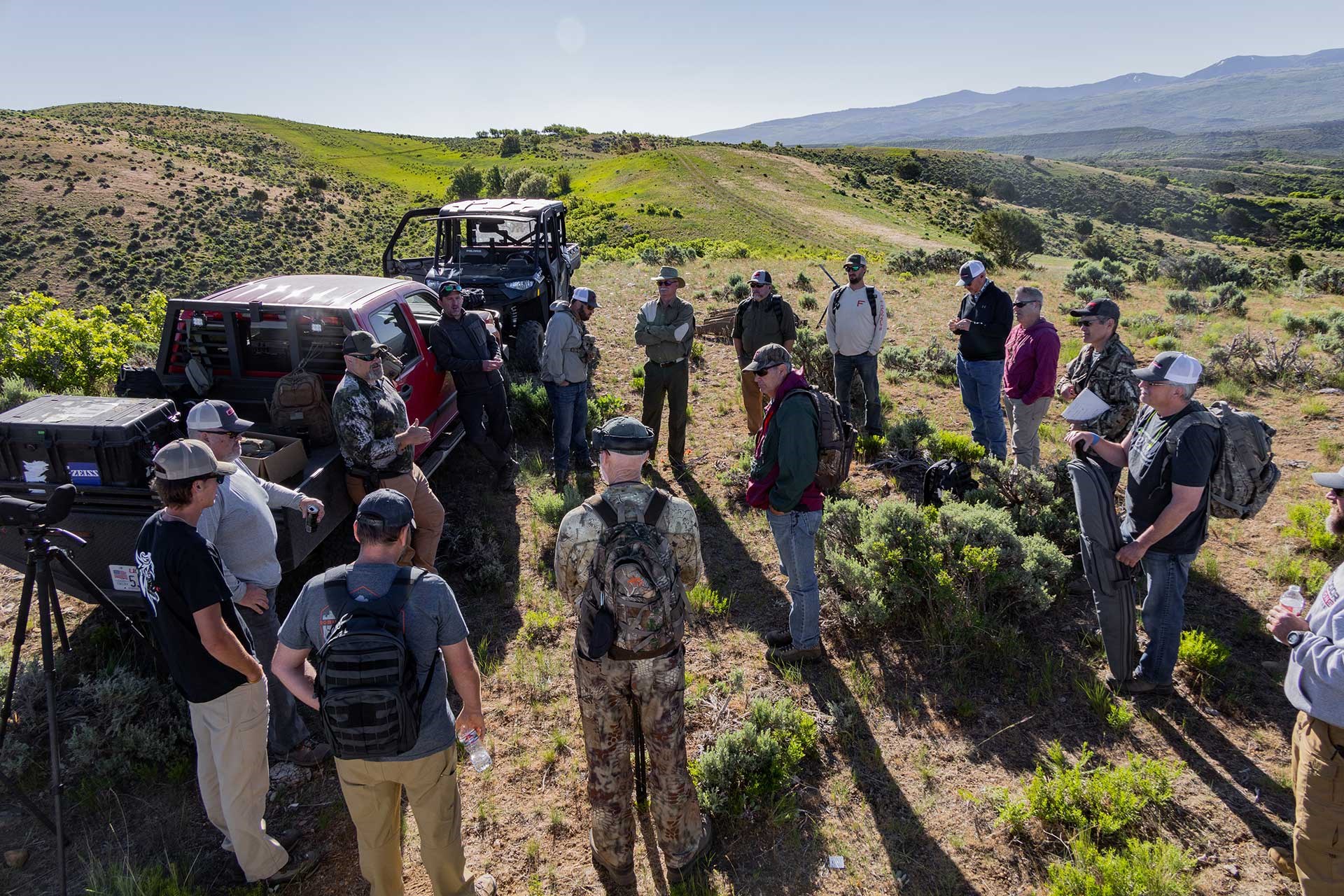 The LRS is a 2+ day experience set in Texas, Utah or Michigan using field conditions for most of the shooting exercises, not a square range. You can bring your own rifle, but the class is conducted using a factory-spec Benelli Lupo rifle chambered in 6.5 Creedmoor and equipped with an Advanced Armament Corp Jaeger suppressor and a Zeiss Conquest V4 6-24X 50 mm scope. The ammo supplied is the Barnes BT Match Burner BT Match 140-grain load. Each of up to 13 participants is assigned their own rifle for the duration. There are three instructors plus support staff. My total round count was about 130.

Your Issue Rifle: the Benelli Lupo

The Lupo is Benelli’s first bolt-action rifle, and it debuted in 2020. Available in six calibers suitable for taking any North American big-game animal, this rifle is built to deliver greater accuracy than most competitive rifles of similar weight and price point, and Benelli backs up that promise with a three-shot sub-m.o.a. accuracy guarantee. In 6.5 Creedmoor, the 6.9-lb. Lupo holds 5+1 rounds in a detachable magazine and sports a medium weight barrel that is 24” long to wring out most of this cartridge’s potential velocity.

The action is slick, relatively quiet, and has a 60-degree bolt throw for more rapid cycling. I found the stock contours make the rifle comfortable to shoulder and carry afield, but they’re not ideal by any means for the benchrest shooting that we did at the onset and conclusion of the course; Not surprising, given its intended use. Like most Benelli shotgun barrels, the Lupo’s barrel is cryogenically treated, which can improve accuracy and is free-floated. The trigger can be set between 2.2 to 4.4 lbs., and mine broke cleanly and consistently at a weight that seemed just under 4 lbs.

It Starts In The Classroom

A threshold requirement to long-range shooting is speaking and conceptualizing the language of milliradian (MILS) or minute of angle (m.o.a.). The LRS uses the latter system, and lead instructor Erik Lund took care to explain more the night we arrived at the lodge. Lund explained what m.o.a. meant and how to work the Zeiss Conquest 6-24X scope, which is calibrated in m.o.a. on its turrets and its ZBi reticle. 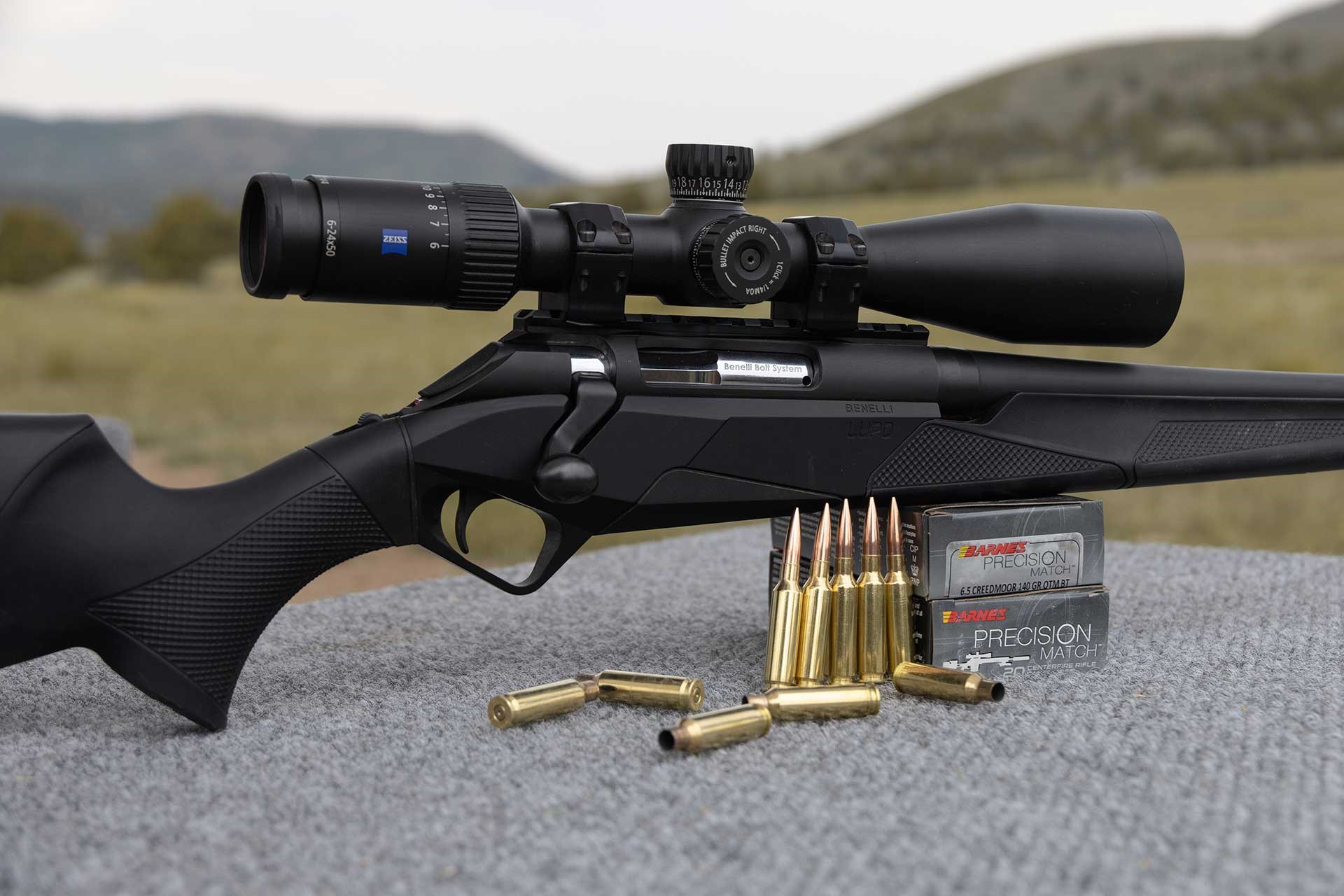 Working the ballistic app and other foundational material is also covered and the worthwhile presentation is emailed to each student for future reference. We would soon learn the practical application of m.o.a. because wind holds, scope adjustments and target size are all communicated in that language.

The next morning, it’s off to the range for a day of known distance (KD) bench rest shooting at 100-yard paper, then square 3-m.o.a. wide steel targets set at successive 100-yard increments up the mountainside all the way out to 1,000 yards. The steel targets are painted with a specific design that helps the spotter call the correct adjustment in m.o.a. by seeing where a round impacts the steel. 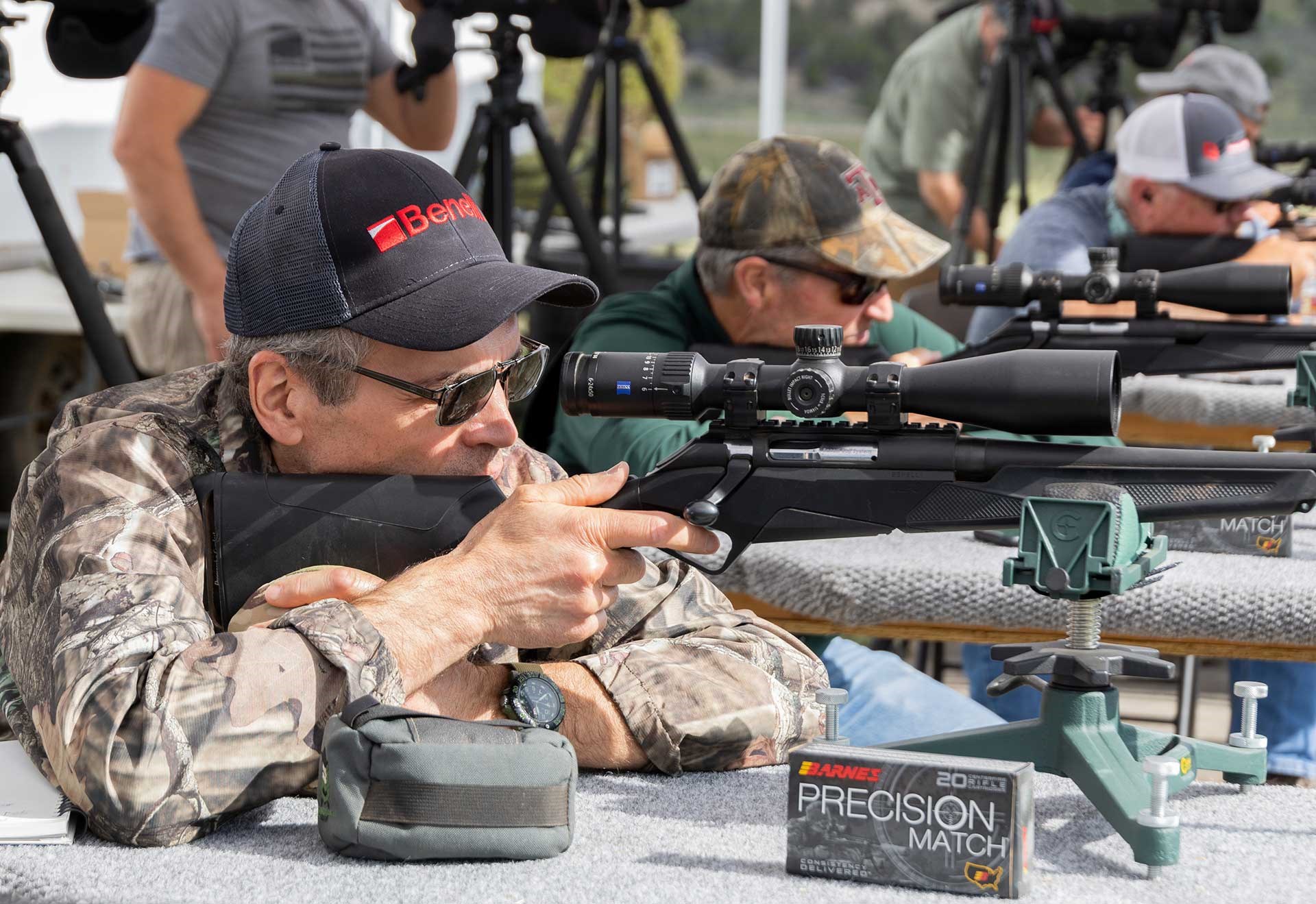 Benchrest shooting techniques are explained, but the most important takeaway for me was learning to use the trigger where your firing hand thumb does not wrap around the stock. This method is unnatural and doesn’t fit the ergonomics of the Lupo’s hunting intended grip, but it’s worth some experimentation. For others, this was the first time behind a suppressed rifle, an experience Lund correctly said would make them never want to go back after seeing how much this accessory makes shooting more pleasant by taming recoil and lessening the harshness of a rifle’s report on the ears.

Day 2 is field work starting with convoying in 4x4s up steep hills into the mountains on narrow paths to an elevation 2,500’+ higher than the KD range. At the summit, you’ll shoot from 12 stations across four locations. Target presentations at each station vary with shots taken on the level, uphill, downhill, and across ravines and draws. Targets are placed in the open from 149 to 700 yards with most at 400 to 500 yards. 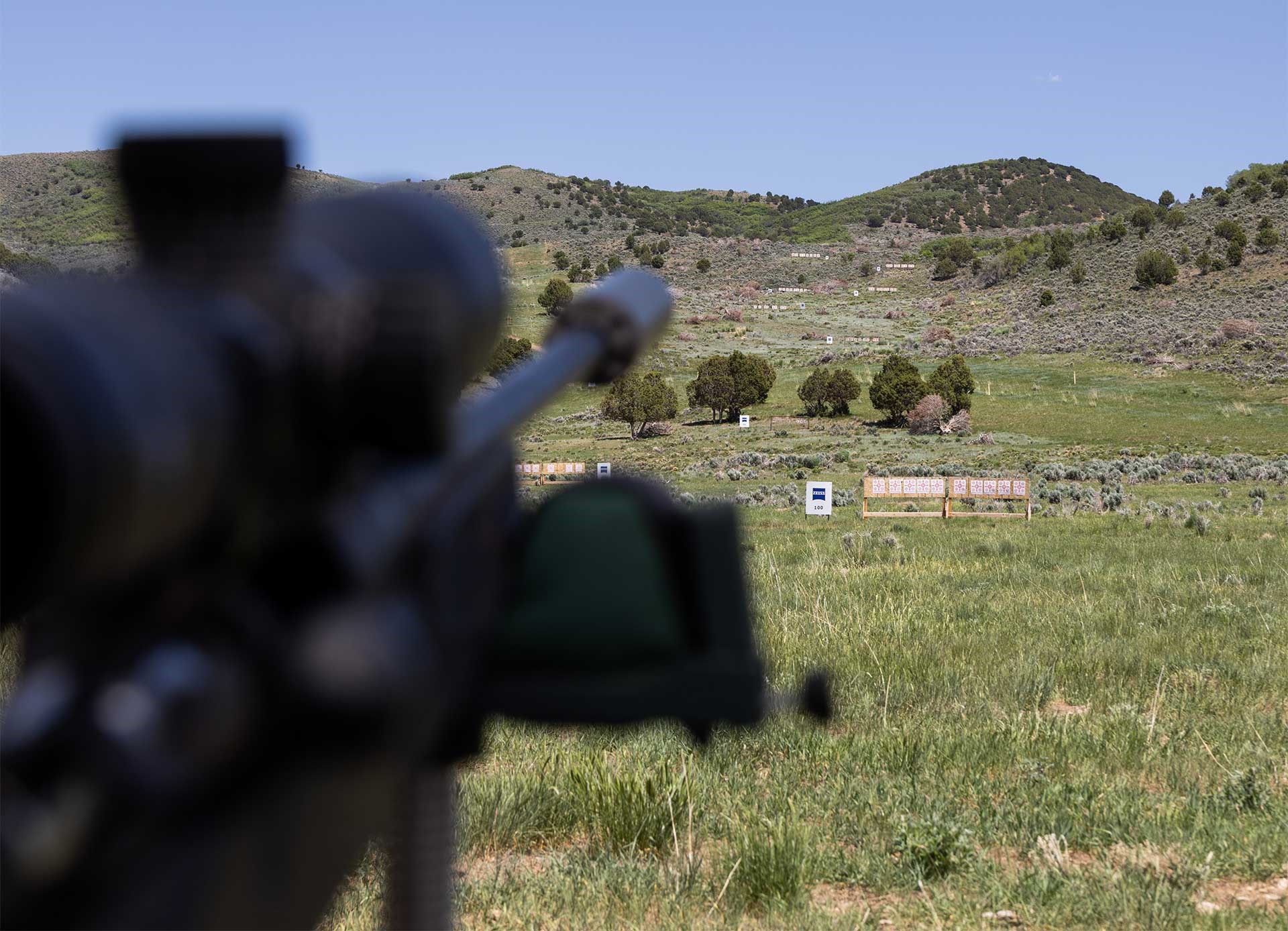 Ranging is done with a Zeiss Victory RF binocular. At some stations, the shooter chooses the firing position with a Sand Sock bag rest and your backpack, while at others, you are instructed to get familiar with using a BOG tripod or shooting sticks to help build a stable firing position. One of the more helpful tutorials in this respect was instructor Eric Suarez’s imaginative use of both the shooting sticks and a bag rest to achieve a rock-solid sitting position on uneven ground.

Building stable positions is a skill easily mastered, but accurately reading the wind only comes with lots of field experience and luck because wind conditions can be very deceptive. Case in point was a 470-yard shot from one ridge to another where a near full value cross wind hit the shooter hard. What was the wind correction we needed to make? As it turned out, nothing. The wind was only blowing where the shooter stood and about 25 yards forward and had no noticeable impact on trajectory. I would have never thought that to be true, and there were no visual wind indicators except at the shooter and the target. 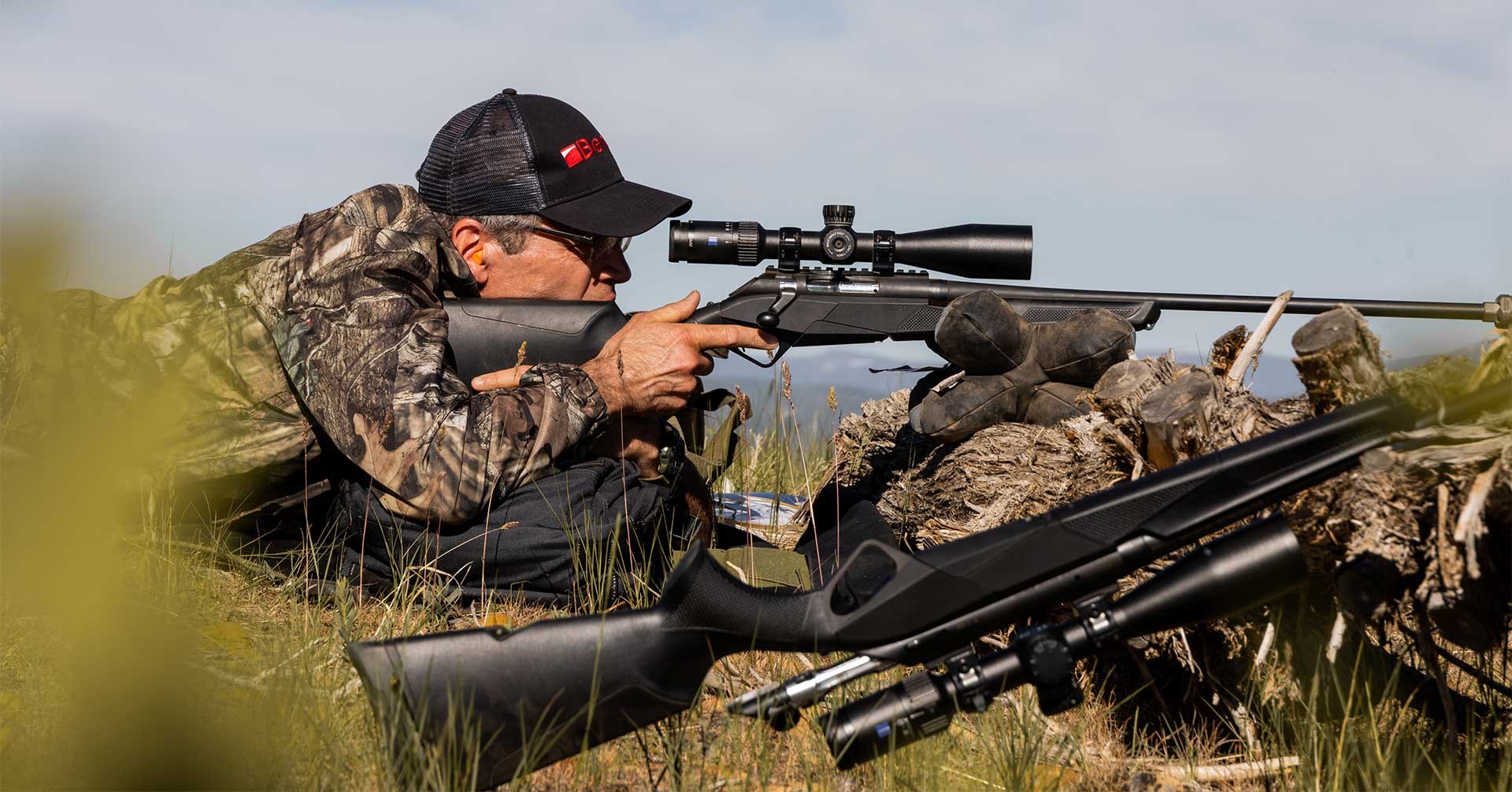 Coming down from the mountains, a final hour on the KD range allowed us to validate our skills on easier targets to conclude the class. This session also gave us a chance to work with the instructors on how to call wind corrections.

A Practical, Field Based Focus

The LRS is not intended for the F-Class shooter or the ballistic nerd; don’t expect to hear esoterica like the Coriolis effect, spin drift, effects of cant, or the reason uphill/downhill shooting is different than firing over level ground. Those matters and much more ballistic knowledge in an interesting read can be learned on your own with Brian Litz’s seminal book, Applied Ballistics for Long Range Shooting.

Taught instead are the necessities needed for reliably hitting steel over two days of live fire. A large part of that knowledge is how to use the GEO Ballistics ARC calculator, which accounts for several environmental factors that impact a bullet’s flight like humidity, temperature, air density and wind. The ARC calculator is key to making it all much simpler than in the past because it tells you the precise minute-of-angle (m.o.a.) adjustments in elevation, and if you use the wind function, windage. Though the steel targets were 3-m.o.a. wide, what was learned certainly applies to smaller targets.

For distant shots, wind reading is by far the most challenging aspect of putting a bullet where you want it. You can do everything correctly–perfect shooting position, trigger control and accurate ballistic calculator inputs—and still be robbed of a hit on target because of the wind. The LRS covers several aspects of wind detection but without using a Kestrel meter or similar device. 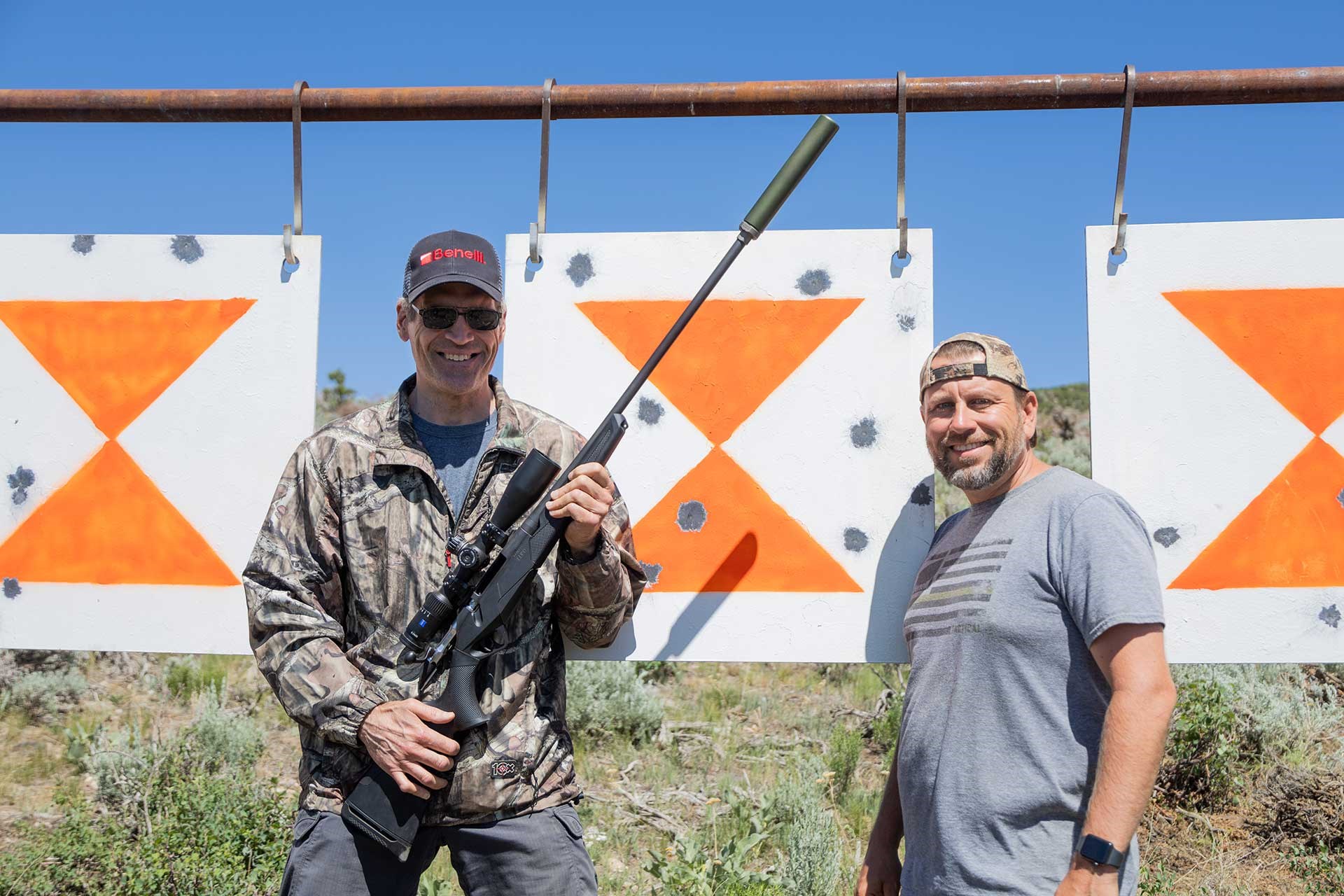 Instead, shooters are instructed to sharpen their powers of observation to detect direction of mirage, vegetation movement, bullet strike dust and spotting trace. In what I thought was the most impressive demonstration of wind calling of the class, instructor Ryan Pettis read mirage at two places downrange to give me a dead on accurate 1.5-m.o.a. correction on an 800-yard target. Looking through the spotting scope after two near perfect shots, I can only say that his well-trained Marine Scout Sniper eyes discerned subtle mirage where I couldn’t see any.

All rights reserved © 2020 From Field to Table