Chili is probably one of the most popular and oldest one-pot comfort foods found across the country. You can find some form of chili on more than 75% of Americas restaurant menus. Chili has Spanish origins using southwest indigenous ingredients. Chili is a culinary prepared dish and chilies are specific types of chili peppers. Chili powder is a spice blend of varieties of ground chili peppers and spices. There are as many chili recipes as there are different types of chili peppers. Chili is as regional as it gets, every region and small town of the southwest incorporate the local indigenous ingredients which result in thousands of types and variations and distinct flavors of the final product.

This is one of 3 recipes (Verde, Red and White Chili) All mentioned in our blog.

We use RecTec pellet smokers/grills for all of our outdoor cooking and all of our wild game is processed using Made With Meat equipment.

Combine spices together and toss into pepper mixture.

Place on roasting pan, roast at 400 degrees for approximately 30 minutes.

While peppers are roasting, in pot or straight sided sauté pan sear meat in oil.

Deglaze roasting pan with some of the broth and add.

Bring to boil and simmer until meat is fork tender. Approximately 1-1 ½ hours.

Peppers and tomatillos should cook down making a nice thick sauce.

Use turkey, rabbit, or any other white game meat for the boar. 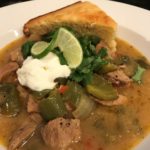