Butchering can take many forms. For some it is a profession, for others a hobby, and for still others (like the professionals over at Made with MEAT!) it is nothing short of an art form. At its core, however, butchering maintains a similar process no matter your particular style or method. Let’s take a look at this procedure from start to finish–it’s much less daunting than it seems.

First off, if you’re fairly new to processing meat, let me direct you to the From Field to Table article Meat Identification. Not only does this do a good job of explaining how to separate some key pieces of meat, but more importantly, it will familiarize you with the terms you’ll encounter further along in this article. That said, let’s get started. 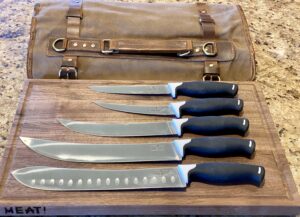 You’ll need several implements before you start butchering. First, of course, you’ll need a quality, sharp knife, and a sharpener to keep it that way. Made With Meat now offers a full line of butchering knives that the OS From Field To Table Chef team use.  If all you’re working with is whitetail or pronghorn, the blade needn’t be any more than three inches long. If you’ve felled bigger game, however, you may want to size up. Next, get a couple large bowls and fill them with water. These will be for washing the meat–the first for an initial, heavy cleansing, then the second for a final wash. Water will need to be changed out fairly often over the course of the process. On a table lay out some paper towels so you can pat the meat dry before packaging (or grinding).

From there it’s dealer’s choice. I like to use a vacuum sealer, like the Made with MEAT! 16-inch External to preserve the meat, while others prefer classic butcher paper (while it works, I find it dries the meat a little too much). Whatever your choice is, have it set out beforehand. You’ll thank me when you’re not scrounging the cupboards with bloody hands. You may also want to grab a scale, to see exactly how much meat you’ve managed to butcher. Finally, if you plan on making hamburger, sausage or jerky, set your grinder, mixer, stuffer, dehydrator or jerky-gun out now. Those particular processes, however, are for another article entirely.

Just as there are many ways to skin a cat, there are quite a few ways to butcher a deer. Note here that if you’re hanging your deer, rather than having carried it out of the field quartered, the progression of cuts would differ slightly, as your backstraps and tenderloins would not yet be freed. If you need a good explanation of how to separate these from the carcass, refer to the “Midsection” portion of the article referenced above. 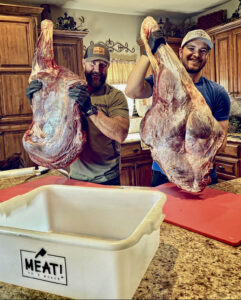 For the moment, as quartering is becoming more popular, let’s assume that you’re working with two hind sections and two front sections. This is good news, as it means instead of having to work with four whole different processes, you only need to learn two, then mirror them on the other side. Let’s start with the hinds, as this will be where the majority of your quality cuts are.

The first major tip I can give is to always follow the connective tissue, as this is conveniently located between muscle groups. The first cut that is easiest to free is the sirloin tip. Find the white bunch of connective tissue about halfway up the hind leg, and make an incision running up along the bone, peeling the muscle away as you go. After it is free, cut away any white connective tissue still clinging to it, and free the tri tip, which will have rolled out with it. Wash these pieces before moving on to the next, so they can begin drying (you will do this for every cut you make).

Next comes the sirloin butt. Cut along the top of the piece following the connective tissue, Then slice your knife in along the thigh bone, and peel it back until the muscle separates.

From there, move to the eye of round, which will be revealed by the removal of the sirloin butt. Its shape is very similar to a tenderloin, and the redness of the meat will stand out.

Once this is out, the big lymph node will be uncovered, which is full of waste products filtered out of the deer’s system. It looks like a small, puffy and yellowish sac. While it won’t kill you if it ends up ground in the hamburger bowl, you definitely don’t want to eat it. Remove it before moving on to the main rounds.

The hindquarters done, it’s on to the front legs. Many people “butcher” these (pun fully intended) and toss it all in the hamburger bowl, as they think there are no good cuts up here. While I understand the sentiment–after all, a good shot often blows out a lot of meat on a shoulder–this is not quite true. 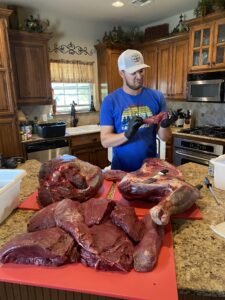 The flat iron is located on the outside of the shoulder blade toward the front. This is a tender enough piece of meat to be cut away and cooked separately. Next, the mock tenderloin is on the outside of the shoulder blade, and looks very round. This should also be removed and kept separate. Finally, however, the shoulder clod which sits below the shoulder can be used as a roast, cooked low and slow or in an Insta-Pot with pressure or you can simply add the shoulder clod to your grind pile.  should be put directly into the hamburger/grind bowl–it is far too tough for anything else. For all these pieces, make sure to trim away bloodshot meat and bone fragments before attempting to clean or freeze. Not doing so will simply dirty your water excessively, and spoil the taste of your good meat if it stays attached.

Last but not least, cut away the shanks, or the lower parts of the legs. If you want to grind them, you’ll need to separate them carefully from the tendons, but you can also use a saw to cut them away bone and all for the stew pot (or osso bucco).

While this is a good primer to get you started, there really is no replacement for doing it hands on. If you’d like to learn more about butchering, check out a From Field to Table event near you or check out this video tutorial from Chef Albert. You won’t regret it.