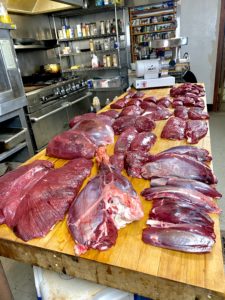 So you’ve dropped your trophy buck. Congratulations! You scouted hard, hunted well, calmed your nerves before your shot, and your bullet struck home. You’ve cleaned him, maybe quartered him, and packed him back home where he hangs in your garage or shed. What next? Well, step one is being able to ID meat cuts as you butcher your deer. 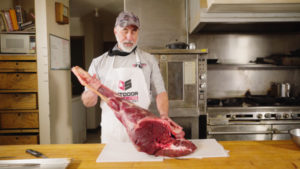 The first piece of meat I like to liberate from a deer is the sirloin tip. About halfway up the front of the hind leg, you can find it by locating where the white connective tissue ends and meat begins. Make your incision here, then follow the bone all the way down with your knife, rolling the meat out as you go. You’ll be left with a roast that is smooth and rounded on top, and flat (or as flat as you cut it, anyway) along the bottom. There should be only a middling amount of connective tissue in the cut, which will itself have a deep burgundy color. The Tri Tip, a small triangular muscle, will often come out at the same time. Simply separate it from the sirloin tip.

Next comes the sirloin butt. This runs along the inside of the hipbone, beginning in the pelvic area, and ending around the tail. First slice along the top and bottom of the cut, following the connective tissue on top, and following the hip joint at the bottom. Next, peel it away by tracing your knife along the inside of the deer’s hip, using the gap left by the absence of the sirloin tip as an access point, while pulling the meat back and away with your other hand. The resulting roast is large and square in shape, and can easily be trimmed of silver skin.

The removal of this roast will reveal the eye of round: a muscle the same size, shape and texture as a tenderloin, which can easily be removed from underneath. It has the same semi-tubular profile as any loin, though it is slightly less tender.

From here you can move on to your main rounds, but before you do, be sure to remove the big lymph node. Right at the top of the eye of round sits a small, puffy, yellowish sac full of material the deer’s lymphatic system has purged. Locate it by pulling out on the meat near the top of the hind from the back of the deer, cut it away and discard. From there, cut the muscle group down to the femur, and filet along the edge, making sure to go deep into the pelvic girdle to get your maximal amount of meat. The resulting piece of meat will be your outside round: long, wide, flat, and almost fully encased in connective tissue.

For the inside round, simply trim the remaining piece of meat that is interior to the pelvic girdle–it is on the large side, flat and vaguely triangular. I generally put this in the hamburger/ground meat bowl, but some folks find it tender enough to cook as a steak or roast. 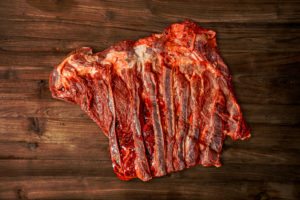 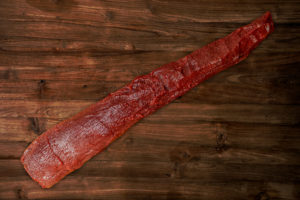 If you’ve skipped straight to this point, make sure you go back to the top and read the hindquarters section. Backstraps may be one of the prize cuts you’ll see when you ID meat, but the hindquarters deserve your careful attention too; besides, the backstraps are among the most easily identifiable cuts anyway. Run your knife along the spine from where you stopped cutting the sirloin butt (around the front of the hips), all the way down the neck. Then begin fileting the meat away from the bone underneath, while pulling the backstrap free with your other hand. Do not cut it to finish, rather keep pulling until the meat runs out in a small pointed tip. This will ensure you get the most meat possible. Once fully removed, the backstrap will be incredibly long and slender, but a dense piece of meat, with little to no fat anywhere on it.

Next turn the deer over (or around, if hanging), and look just in front of the pelvic girdle. The tenderloin is connected there, clearly visible as the only meat of smooth texture and deep color in the area. There will be some fat and dried blood on top at its rear–make sure to trim this off, before fileting the tenderloin away from the carcass. Much like the similar-looking eye-of-round, it will be pointed at one end, wider at the other, and with a semi-cylindrical shape.

The midsection of the deer also contains the flank steak (a small flat, tender muscle rear of the ribs, on either side of the belly); the skirt steak (the thin, somewhat tough muscle in the body cavity separating the vitals from the stomach); tough belly meat; and (of course) the ribs, but unless the deer is a real monster, these areas will likely be so thin as to make removal rather difficult. In the case of the ribs, there will also likely be a fair amount of meat damage, particularly if (like myself) you favor a hard-hitting larger caliber rifle. Nonetheless, remove whatever you can, as good candidates for the grinder, smoker or stewpot. 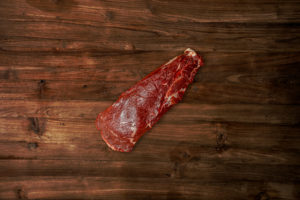 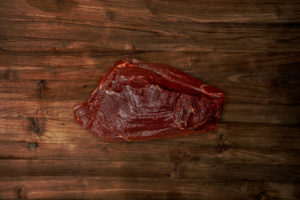 Three more cuts you should strive to identify when you ID meat from deer are on the front shoulder: the flat iron, the mock tenderloin and the shoulder clod. There will likely be a decent amount of meat damage here, but salvage what you can. The flat iron is located on the outside part of the shoulder blade, toward the front. It is relatively tender, and worth your time to remove carefully. The mock tenderloin is a little less tender, and is located on the outside of the thin part of the shoulder blade. It is shaped like a round fish. Finally, directly below the shoulder blade sits the shoulder clod–it is an incredibly tough collection of muscles, and should be destined for the grinder or the stewpot. 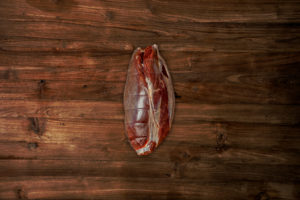 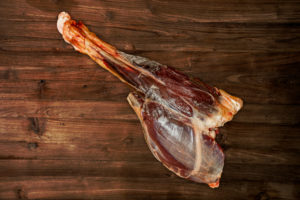 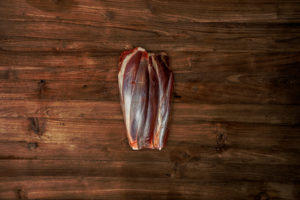 These represent the main cuts of meat you will want to identify when processing your deer. This does not mean that is all the meat you should take off a deer, however. The shanks–or muscles of the lower legs–are cut away by many for inclusion in the hamburger bowl, and by still more discerning chefs for osso bucco. Small and comparatively full of tendons, they are difficult to identify beyond this rudimentary description.

Whatever the cut of course, it’s all delicious when cooked right. Check out the “Recipes” section on fromfieldtotable.com for some great ideas on that front, and check out the helpful graphic here for some in-depth visual assistance on the butchering process.

To see the processing equipment we use from Made With Meat to make processing at home much easier, check out their line of equipment.